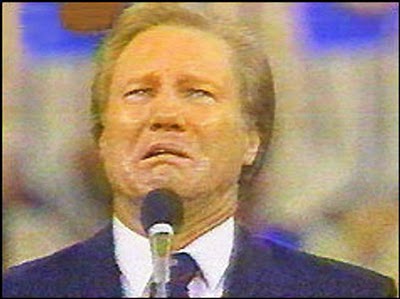 And WELCOME to Apology Smackdown 2010!

Today, 3 mea culpas will go head to head to head for the right to be crowned "Apologist Of The Year!" But first, let's meet our apologists!

Mark "Hasta Luego" Rogers - owner of Legends Restaurant. His wild gyrations can throw off opponents, yet he can be taken out of his game when things get hairy.

And there's the sound of weeping, signaling the start of play!

Toyoda: "I offer my apologies for the worries."

Mark: "I shouldn't have lost my temper and I'm sorry."

Tiger: "I am deeply sorry for my irresponsible and selfish behavior."

Tiger comes out strong and sets the pace although Mark's opening is also solid. But Toyoda misfires - we're talking about cars killing people and he sounds like he forgot to call his parents after Prom! Although it could have been a bad translation!

Toyoda: "We have caused lots of concern and worry and we are sorry."

Toyoda comes back with a nice flurry! Tiger brings it strong, especially with "atone" and it's religious connotation. But Mark goes to the lame excuse early - it's the restaurant business in 2010, Mark, EVERY day is slow!

Toyoda: "This kind of procedure is good for customers."

Troy: "I want to extend my sincere apologies to all the teachers out there."

Tiger: "I was unfaithful. I had affairs. I cheated. What I did was not acceptable."

And we have our first substitution! In for Mark is Troy Lebeck, Director of Restaurant Operations for Legends, with a nice recovery! Toyoda whifs again by appearing to claim that a recall is good for their customers - like a philandering spouse telling his wife that an AIDS test would be good for their marriage! Speaking of which, Tiger has opened up a huge lead with the strongest statement of the Smackdown!

Toyoda: "As a company, our intention is to sincerely give 100% cooperation."

Troy: "Legends has donated thousands of dollars to area schools, from simple fundraisers to feeding the football teams, to after prom parties, to little league sponsorships."

Tiger: "From the learning center students in southern California to the Earl Woods scholars in Washington D.C., millions of kids have changed their lives and I am dedicated to making sure that continues."

Down goes Tiger! Down goes Tiger! And he takes Troy with him! As both men stumble to the canvas with a "look at all the good I've done" thud! But can Toyoda take advantage of the opening? No! Cooperation only came after enough Camry owners crashed, burned and popped like kernels and the Feds threatened to jump in!

Toyoda: "We want to make our best effort to deal with this matter for our customers' security and safety."

Mark: "I was overwhelmed in the back and had no idea what situation was going on out there."

Tiger: "Parents use to point to me as a role model for their kids. I owe all those families a special apology. I want to say to them that I am truly sorry. It’s hard to admit that I need help, but I do."

A nice bounce-back by Toyoda! Mark's back in for Troy, and still rolling out excuses! You're the owner, Mark - stick your head out and make sure the place isn't on fire! And speaking of being on fire, there's Tiger, back with his A game - an unprecedented admission of vulnerability!

Toyoda: "We are committed to putting the customer first - it's our priority."

Troy: "I hope you can find the compassion in your hearts to forgive him. Again, my sincere apologies."

Troy's back in and he and Toyoda both finish strong, but it's too little too late! As Tiger slams the door on his opponents with a lyrical reference to Kenny Rogers' "She Believes In Me" and takes Apology Smackdown 2010 to notch his first win of the year!

"The most effective apology is the one that never has to be used."

(Click here to read the Marc Hansen column about Mark Rogers including my take on the incident and the state of customer service in general.)

Jonnie Wright is a marketing consultant and customer service trainer in Des Moines, Iowa. Email him at jonniewright@thebuyosphere.com.