The Unsecret Shopper Goes Shopping - And Finds A (Miraculous) Smile

"There are no accidents. There are only encounters in history." -Pablo Picasso

Meeting Virginia Wiggins was an accident. So was her being met head-on by a drunk driver.

The first happened on Tuesday. The second occurred 34 years ago.

One event makes sense. The other makes us shake our head at its senselessness.

Out of the luck of randomness and the soundness of reason, comes Virginia's incredible story.

We discovered each other at the checkout counter of the Git N' Go at 2911 Douglas. She was there because she manages the store. I'd popped in because I needed a break from working on a Secret Shopper review (which you can read next Thursday).

I'd never been inside that Git N' Go before Tuesday.

The feel of one and the thought of the other, however, was no match for the sound and sight of Virginia's unexpectedly warm greeting and inviting smile, which she offered from the get (n) go.

Her beautiful smile continued to find its rightful place on her face as she scanned the 20 ounce bottle of caffeine free diet Pepsi and Kit-Kat bar that pose as a healthy breakfast for certain bloggers.

I gave her my debit card. She gave me a thank you. That was that - just another retail transaction on a day and in a store full of them.

Yet as I walked out and got into my car, I knew I'd be getting back out, and walking back in.

There was something about her smile.

It's not as common as one would hope, for us shoppers to see an employee smile during a retail transaction: it happens just 60% of the time, according to The Des Moines Customer Service Survey.

I've seen a total of 9 employee grins since the end of March, when I started The Smile Project, a program designed to reward employees for doing exactly what Virginia did.

I had $25 in my wallet, and time to kill. I went back in, told her who I was, what I did and that she was Smile Project Winner #10. I asked her why she smiled, and seemed so happy. I started to take notes about what I thought would be a nice little "feel good" story.

I had no idea.

Virginia Wiggins was just a year and a half old in the spring of 1976, when she, along with her mother, brother, sister and aunt piled into the family car, her aunt at the wheel.

The vehicle was started, the engine put into gear and away they went, happily motoring down a random road in Virginia's hometown of Kinsley, Kansas, which lies in the western part of the state, about 130 miles west and slightly north of Wichita, on Highway 50.

"I don't know where we were going," she told me. "We were all just together, just out for the day."

A local man was also  out and about in Kinsley that day, making the rounds. He stopped into a liquor store, purchased a bottle, got back in his car, tucked the bottle securely between his legs, and began driving.

"They said he was drunk before he got to the liquor store," Virginia recalls, her smile fading slightly. "They shouldn't have sold him anything."

There are hundreds of streets in Kinsley, pop. 1,500. Virginia's family used them every day, and knew them well, as did their neighbors and friends. That's part of the reason we live in small towns, part of the allure of living in rural America: we feel secure.

Virginia was not in a child safety seat.

She also wasn't wearing a seat belt. Neither was anyone else in the car.

Hundreds of streets. Just not enough.

The cars met head on.

Virginia's injuries were the worst.

The force of the collision snapped the baby girl's neck against the seat so violently that it severed nerves, paralyzing the right side of Virginia's face.

"I have no memory of it," she says now, sharing the painful memories that do exist for her, in the long, slow wake of years since the accident.

"I was taunted by kids as I grew up...I went through a lot."

There were also years of speech therapy.

The accident, the death of a loved one, the life-long disfigurement, the teasing, the trauma - Virginia's life could have taken a lot of dark turns, and no one would have blamed her.

"I developed a coping mechanism. I decided to kill 'em with kindness."

Instead of walling herself off, Virginia reached out. Instead of allowing bitterness to imprison her spirit, she gave her joy free reign.

"I was raised in a happy family," she says, through a grin that proved the truth of her words. "Much of my attitude had to do with my mom."

Perhaps most important in explaining how Virginia got here from where she was, is what she said next.

The drunk driver was charged, found guilty (Virginia doesn't know how long his prison sentence was or even if he served time, or what became of the man) and forced to pay $50,000 in restitution to the victims.

"My mother put my share in the bank. Savings account interest rates were very high, at the time," she says, with a chuckle.

Virginia has much to laugh and smile about, she will tell you: a good husband, a healthy 8 year-old son, a five year career with Git N' Go ("A GREAT company!").

She also believes in sharing her happiness with every patron who enters her location.

"Who wants to come into a store and hear your problems?"

Be smiled at, greeted, engaged and thanked by Virginia sometime - and you'll never suspect she's had any.

And that's no accident. 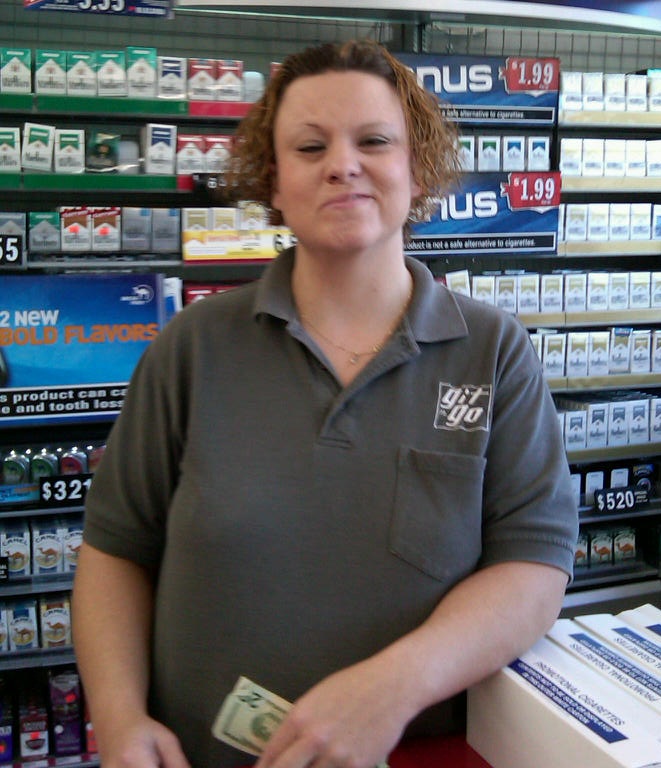