The Story Of Tater, The Untrainable Employee

We are believers. All of us. It is the very nature of our humanity to believe - to buy into, to accept - in many things, such as the physical world that we can not see, like gravity and atoms or in immeasurable ideas that require our faith, like God and love. 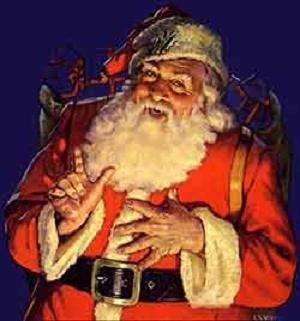 Business owners believe an employee can be trained to care as much as they do.

As a day-dreaming child, caring friend, dangerous golfer and pretty good customer service trainer, I was once naive enough to believe in all of these things. Then I met Tater, the untrainable employee.

To paraphrase Dustin Hoffman in the movie Little Big Man, "that was the end of my believin period."

Eventually the answers would show themselves to me: "No, you can't" and "yes, you do."

Tater (or Tate, once you get to know him) was (and still is) a male shih-tzu, with a weird left eye, round belly and unknown back story. The local animal shelter thought there'd been abuse by Tate's alcoholic owner, thus explaining the constant escape attempts and late night highway jaunts.

But Tate was no skittish darty-eyed nervous nellie. In fact he was the most gentle pliable dog I'd ever been around - quiet, calm, content, consistently prone and admirably immobile, more in common with a doorstop than a dachshund.

Perfect! He was adopted, brought north and prepared for years of harmonious gentility.

The first sign that Tate wasn't the doorstop purchased showed itself when an attempt was made to kennel train him - both to teach him to show a sign when he had to "go outside" and to stay inside a kennel at home while he was alone.

He flunked both courses.

While someone was in the room with him, Tate was fine - he'd lie placidly in the kennel, accepting of his imprisonment. Problems surfaced when he was left alone - the first time, the kennel ended up 10 feet from its original location.  The aftermath of the second time was an overturned kennel, a bent metal door and Tate, on the couch, thumbing through Cosmo.

Maybe it was the wind. Or that he wasn't used to confinement. No problem - next came a kinder gentler soft kennel made of breathable mesh. In three days of short-term kenneling Tate had chewed, clawed and burned his way through it with an acetylene torch - it was totally destroyed...shredded.

Step 3 was a metal cage. If WWE wrestlers couldn't get out of one, neither could Tate. 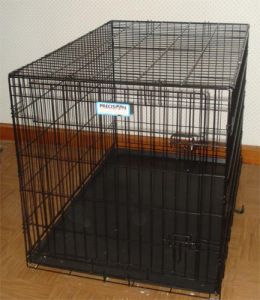 The problem is that those guys may be roided up physical freaks but they're still only human. Tate is - uh, remember the scene in Jurassic Park where the park manager talks about how the dinosaurs toss themselves against the electrified fence to determine weaknesses in the system?

It took him about a week but Tate discovered a construction weakness in one of the welded corners of the cage - by ramming his head into it until it snapped. The rest was easy. Tate simply somehow squeezed his bowling ball-wide body through an opening the size of an Iphone. Or he's possessed by the Devil and floated through the cage then cut the bars and himself to make it look like he'd battered his way out.

That sounds marginally unreasonable - until you understand that I came home one day to discover that Tate was gone. Vanished. Poof! The kennel idea had been scrapped in favor of raising an apartment free-range dog. Try getting out of a locked apartment, smarty pants!

He had. As I plaintively called out his name while I frantically looked under the couch and the bed and inside the toilet, I could feel my brain shutting down, like HAL in 2001: A Space Odyssey: "My mind is going. I can feel it."

Unfortunately I found him. I don't know how he survived, unharmed, that time or the next two times - two  more escapes, two more holes, two more screens and a total of $66.66 to repair all three.

The Devil and I have come to an understanding

I started taking the Devil with me. Where I went, the Devil went. And I won't tell you about the time he escaped out of my still running Prius by pressing his paw down on the power window lever, lowering it and jumping out. Or how loading him up on doggie downers only slows him down.

So that's the story of Tate the untrainable dog and the people who love him, who have also all come to an understanding. He'll always melt in their arms, like a slab of butter on a warm piece of toast. He will always be great with kids. But he'll never be great with kennels, or being alone behind a shut door.

So in return for his kindness and gentility, Tate will never be without the company of a person. We don't own him - he really owns us - but we do owe him, and ourselves, the great pleasure of our love.

Similarly, business owners, you do not own your employees - but you do owe it to yourself to not let your untrainable employees own you. Unless you're prepared to take them everywhere you go i.e. stand beside them and look over their shoulder and monitor them every minute of every hour of every working day. Otherwise you run the risk of keeping that untrainable employee while they shred, cut, chew and destroy your business.

Those are your options - for dealing with an employee that I call a TATE:

Jonnie Wright is a customer service trainer, marketing strategist and ad writer. Email your comments and questions to Jonnie, at: jonniewright@thebuyosphere.com.