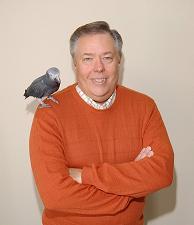 Before you get all excited that a new high-end boutique called Michael Libbie has opened in Des Moines' downtown Skywalk, let me clarify that a) Michael Libbie does not carry designer wear although he must wear it, since the guy looks like a million bucks, and b) my Secret Shopper score of Michael Libbie, based upon my Five Pillars of Great Customer Service is BOFFO!

That's in spite of the fact that Michael, President and CEO of, and mad evil scientist for Insight Advertising, Marketing and Communications, a highly successful advertising agency in Des Moines, temporarily lost his good sense and invited me to appear on his wonderful webcast show called Insight On Business, which he hosts every weekday from Noon to 1 on Webcast One Live, ensconced in plush, ornate boy-toy-filled studios inside the Skywalk.

Michael is somewhat older than me, looks better than me and has forgotten more about marketing, advertising and life in general than I know, or will ever figure out. Because of this, I had to subdue the strong urge to beat him with his own microphone. I eventually managed to relax and enjoy the hour we spent together, watching a media genius and genuinely nice man, at play.

Go to the link to Monday's show by clicking this sentence.  (If you watch and listen while Michael is on camera, talking, then cover your eyes whenever I chime in, you'll be happier.)

Michael followed the Five Pillars of Great Customer Service to a T (smiled, greeted, engaged, thanked and followed up), then added about a thousand more of his own.

Maybe a Michael Libbie boutique isn't such a nutty idea after all; call your banker, Michael.

Bank on me having Michael on my terrestrial radio show (Saturday mornings 8-9am on 1350 KRNT) in the very near future.

Tomorrow's Unsecret Shopper Radio Show, speaking of which, will feature what is kindly referred to as "an encore presentation" and more commonly known as "I'll be in Kansas City watching the Iowa State Cyclone football team try to prove that Northern Illinois wasn't a fluke and the Hawkeyes aren't a trend."

The weather(wo)man's prediction for the weekend seems more secure: rain. Enjoy dancing between the drops. See you back here on Monday.

Please shop and serve happy - for yourself, and the rest of us. :)