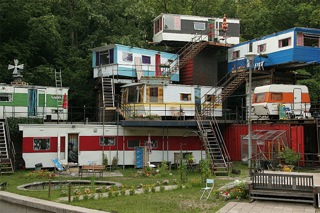 There was a story in yesterday's Sunday Des Moines Register about a mobile home fire in Arlington, in Northeast Iowa. Tragically, the fire killed three people. Ironically, just a week before, The Register published a multi-part series about the dangers of old mobile homes.

I grew up in an old mobile home. The recent rash of stories about them brought back memories.

From birth to four years old, I lived with my mom in an old trailer at Mel Ray Trailer Court in Ankeny. (The trailer park is now a retirement community, still with trailers, still southwest of the DMACC campus.) My grandma Dorothy also lived there, about 10 trailers down, in a slightly newer trailer, with two of her other kids, who I knew as Aunt Candy and Uncle David.

The adults decided to upgrade our dwellings in 1968; Grandma, Mom, Candy, David and I all moved to a pretty, tree-lined 3/4 acre spread on the west outskirts of Cambridge.

We lived in trailers.

Mom and I got Grandma's run-down hand-me-down. Mom hired a guy to move it from Ankeny to Cambridge. I remember following behind it in our Rambler, watching pieces of the 8 year-old mobile home fall off, like we were the Ma and Pa Kettle's, rolling north up highway 69.

Our dwelling was a dilapidated single-wide, with two dinky bedrooms and a broom closet-sized bathroom.

Metal skirting was placed along the bottom. Grandma Dorothy's (second) husband, Grandpa Jack, built and attached a small six by eight addition, as well as an alcoholic could.

It became my bedroom - part of the home I would live in for the next 15 years.

One of my earliest memories is of my mother tying one end of a piece of clothes line around the base of the inside front door handle, and the other to the dining room table. She would secure it the night before, to ensure that I would be there when she woke up in the morning, and not over at Grandma's new crib.

My 4 year-old fingers finally got the rope untied. And Mom had to apply layers of duct tape around the base of the door handle, inside and outside, because the stress of the rope had loosened the handle to the point where it would have fallen off, otherwise.

I can still hear the distinct sound of the gray tape pulling away from the door's surface over the years, as the aging adhesive gave, every time you opened the door.

I can also smell the distinct smell of dead, dying and quite alive mice.

The underbelly of our trailer - with its sagging heat ducts and exposed wiring - was a jungle gym for rodents.

Sure, they'd spend the warm, lazy days of summer outside, stuffing their bellies with corn from our neighbor's field. But by early October, they'd migrated back inside, in time for the ritual of the lighting of the furnace pilot light. Every time the furnace came on (which was a lot) it blew the stench of rotting mouse flesh throughout the house.

Mom put down traps. It was like hanging a Shell No-Pest Strip from a tree by the Skunk River.

One year we caught 18 varmints. A humidifier caught a dozen over the years. I found a few with my feet, still alive, but not feeling terribly spunky after munching on d-CON. I managed to kill one while I made toast - and immediately switched to cereal. Even today, I will turn a toaster upside down and shake it before tossing in an english muffin.

The rest of the mice watched and laughed at the bozos who didn't make it "home."

There were turds everywhere: on silverware in a drawer, on the tops of cans in kitchen cabinets; on clothes and towels tucked "safely" away; along base-boards, underneath sinks.

At night, lying in bed, I could hear mice scramble up and down the wall, beside my head. Right above me, there was a huge hole in the ceiling tile. Occasionally a few particles would drift down as I tried to read myself to sleep. I'd look up, and imagine I could see the whiskers of a curious mouse, peering over the edge. I'd read another three hours. I still can't fall asleep without reading.

One night, after slipping into a light slumber, I woke up - and was eye to eye with a curious mouse, standing on the edge of the bed, the width of Curious George Goes To The Hospital away. He scurried over the side before I had a chance to ask him if he'd read If You Give A Mouse A Cookie. I fell asleep three days later.

I began turning on a fan at night, to block out the sound. I still sleep with one on. And I never sleep on my back.

We never had rats. Apparently, the living conditions were too cold and damp for them.

The ceiling in the living room would leak, 10 days after it had rained. The slightest winter's wind would blow through the ancient window seals, making the curtains billow. Hornets found their way inside as easily as mice. A cross-dressing alcoholic once found his way into our home.

Yet vermin, insects and people could get out, fast, if so motivated - by the sound of the town's tornado siren. You didn't want to be inside a trailer when "the big one" hit.

It made for exciting summers. And a lifelong interest in tornados.

I see now how bad our living conditions were. But at the time - particularly when I was younger -  I didn't know any different. It was home.

The trailer was also where my mom and I shared our love, and laughter.

She let me pick the food she'd use to bait the mouse traps: "Cheese or peanut butter?" she'd ask. "You pick it, I'll set it." She let me wear her Felix The Cat slippers when my feet got cold from the incessant drafts.  She glued gold paper stars and glitter to the ceiling in the living room to try to hide the rain water stains, and told me that I could look up and see the stars shine, without ever having to go outside.

Eventually I escaped. After graduating from high school, I spent less time in the trailer and more in college dorm rooms and apartments. I didn't stay another night in the trailer after 1985.

Five years later, Mom found her own way out.

She stepped out the front door on a cold, early January morning in 1990, walked behind the trailer she'd called home for over 20 years, and hung herself from a tree.

With a piece of clothes line.