A Death In The Family: Emmie, Dr. Bolser And The Power Of Customer Service

Is there any customer service that makes us feel less like a customer, than what we receive during our greatest moments of crisis?

The police officer that responds to our 911 call. The ER doctor who stabilizes our child's vitals. The psychiatrist who talks us off the ledge. It is their job to solve our problem. Yet it is their humanity that lays its warm hands upon us, quelling our fear, stilling our heart, easing our pain. In these critical moments, they are not employees fixing what we bought. They are heroes, saving what we love.

One that couldn't be, was the much loved Emmie.

I carried her limp body into the Clinic, where a concerned receptionist checked us in to an exam room. We were joined shortly by Dr. Bolser, who was greeted by tear-stained faces and heavy hearts.

Dr. Bolser, who neither one of us had met, listened intently while we described what happened, nodding his head as he looked over Emmie. After we finished, he tenderly offered his prognosis, and our possible options.

Yet none of them was the equal of Dr. Bosler. His humanity ruled the room, larger even than his technical skill as a vet, which appeared sizeable in its own right. I've never met a veterinarian who possessed such an amazingly kind nature, wonderfully gentle spirit and warm nurturing demeanor.

It was a moment, with two heartbroken people and a suffering dog, which demanded all three.

Emmie had been raised as a puppy by Lorri and her children.  She'd been turned into a skilled hunting dog but exclusively outdoor pet by Lorri's husband, then been set free many years later, as had Lorri, by her courageous divorce. To celebrate, Lorri brought Emmie inside, to stay, where all dogs should be allowed to live, play and dream, to love and be loved, as not a dog at all, but as the shortest, hairiest member of the family.

The first time I met Emmie, I felt something less than adoration.  She expressed her joy at seeing a new friend pull into her driveway, by running up to my six month old Prius, crashing her large paws onto my driver's side door and happily digging her happy claws into it, which immediately diminished the car's value by $2,362.09.

Several weeks later Emmie was a bargain, costing me just eight bucks in what would be known as The Pasta Incident, when a very silly blog writer left two quarts of expensive gorgonzola pasta from Gateway Market in his Prius' backseat "for just a moment" while he ran in the house, returning way too long later to find one empty container and one full dog, with a cheesy ring around her snout.

There was Emmie's silly hound dog barking when you barked back equally silly at her, and her low guttural moan when you softly rubbed her belly, making you want to rub it all the more, which was certainly her point. There was taking Emmie for a walk, and your sore arm asking, "Who is walking who?" There was the late afternoon sound of opening the fridge, signaling Emmie that it was "ham treat" time, which would send her lumbering into the kitchen, her long toenails making the most annoying clicking sounds, followed later by another annoying sound, signaling the release of her room-clearing ham-gas, that was certainly Emmie's revengeful way of saying, "THAT'S what you get for yelling at me about my toenails!"

There was her wonderful obedience, as she'd always go into her crate with a simple "Kennel, Emmie" voice command. There were her hilarious summer stare-downs with nearby laughing rabbits, who would toy with her, as they knew exactly how far Emmie could reach before her shock collar was tripped by underground fencing. There was the beauty of the smile you were sure you could see on her face every time you let her in from going potty, thanking you for freeing her from a lifetime spent outside, and allowing her to call the inside of your home, her home, too.

A final moment of freedom was now coming, for Emmie.

Lorri and I asked Dr. Bolser to leave the room, where we then spent a few minutes talking about Emmie's options.

Yet looking at Emmie as we talked, her eyes still rolled partially back into her head hours after her seizure, her breathing coming in occasional shallow gasps, her legs splayed and nearly unable to support her weight, we both realized that there were not several options for Emmie, but just one.

Several minutes later, Dr. Bolser returned, syringe in hand, assistant by his side.

While Lorri and I wrapped our arms around Emmie, Dr. Bolser gently inserted the needle into her arm and depressed the plunger, releasing the tranquilizer into her vein. We held Emmie and whispered I love you's into her ear, as her head slowly slumped down to the metal examination table.

And so she is.

It is never easy to lose someone you love, especially when the loss is stark and sudden, as it was with Emmie. Yet we understand the rules going in, that each living thing that we love is mortal, governed by the rules of God, who will call us home on a day and at a time of his choosing.

As Emmie was called home on Friday, all of us who were left behind, who were touched by her, feel a little emptier today without her, and we grieve her loss.

Yet in the process of losing her, we have gained something, too.

It is the beautiful discovery of a very special man, who likely doesn’t consider himself special at all. Yet Dr. Karl Bolser’s incredible warmth, compassion and gentility will remain in our hearts forever, wrapped around the memories of Emmie, who now runs free. 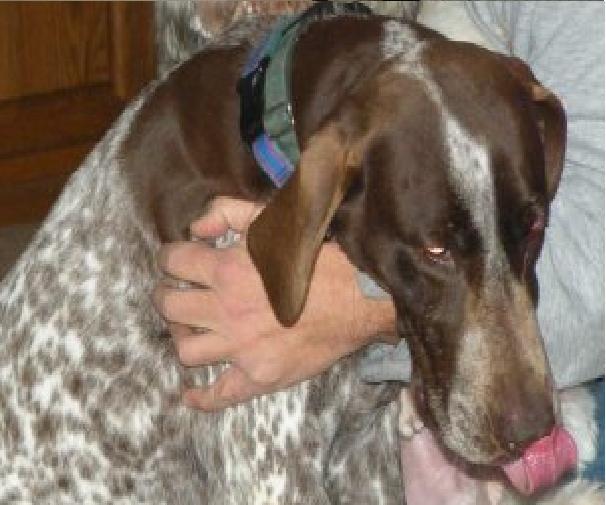